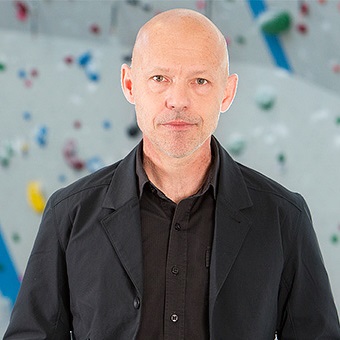 In 1982, Jeff and a college roommate taught themselves to climb in Rock Canyon in Provo after purchasing a copy of Royal Robbins’ Basic Rockcraft to guide them. During these early climbing years, Jeff completed his bachelor’s degree in Engineering Geology.
He then proceeded directly to what he calls, “the graduate school of new rock climbs,” making many first ascents on the steep cliffs of American Fork Canyon, the Virgin River Gorge, Logan Canyon and Maple Canyon. From pioneering American sport climbing, to opening Provo’s first gear shop and later co-founding Momentum in 2006, Jeff has played a significant role in the evolution of climbing for over 25 years.

“I am fortunate to be a part of Momentum, working with a team of like-minded climbers sharing the beauty, excitement and reward of climbing with new generations,” says Jeff.

In addition to leading Momentum’s expansion, Jeff serves on USA Climbing’s board of directors, hikes regularly in the Wasatch backcountry, and enjoys time with his family at home and in the outdoors.